By David George-Cosh Published January 03, 2018 Features Dow Jones Newswires – A handful of Canadian miners are ramping up operations to mine cobalt, betting on demand for a socially responsible source of the metal that is in high demand as a key component of electric cars.

Most cobalt currently comes from the Democratic Republic of Congo, where supply is threatened by political, legal and labor issues. That means car makers and battery suppliers are increasingly looking elsewhere for the mineral.

Miners in Canada such as Vale SA, which has a cobalt-producing mine in Sudbury, Ontario, Sherritt International Corp., and smaller firms such as Royal Nickel Corp., First Cobalt Corp. and Fortune Minerals Ltd. are raising funds and engaging in exploratory drilling. Mainly through operations led by Vale, Canada is the world’s third-biggest producer of cobalt, after the Congo and China, accounting for about 6% of the world’s supply, according to the U.S. Geological Survey.

The metal is a crucial component of lithium-ion batteries, which are used to power electric vehicles as well as portable electronic devices due to its ability to conduct electricity when stacked with other metals such as lithium and nickel. 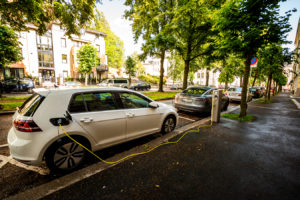 The demand for socially responsible sources of cobalt comes as the price of the metal has soared to $75,000 a metric ton on the London Metal Exchange, more than double the price from the start of 2017.

BMO Capital Markets expects current cobalt prices to double in the next two years as demand for electric-vehicle batteries continues to outstrip existing supply of the metal, the bank said in a report released in December.

The Congo produces roughly two-thirds of the world’s cobalt, or about 66,000 metric tons a year, but mines there have been criticized over reports of child labor and unsafe conditions.

Amnesty International released a report in 2016 that found thousands of children, some as young as 7 years old, and adults, mine cobalt in the country and work in perilous conditions without basic protective equipment. The organization was able to trace the sale of that cobalt to Chinese refiners, which then resold the mineral to battery component manufacturers.

In addition, a major mine there that is jointly owned by state mining firm Gécamines, and Belgian-based Groupe Forrest International SA, has been caught up in a labor-contract dispute. And an analysis by the Carter Center, a human-rights nonprofit, found nearly $750 million in royalties, bonuses and proceeds from asset sales that are estimated to go to the Congolese government are missing from Gécamines’s accounts. Gécamines has disputed the report and declined to comment.

Volkswagen AG and nine other leading car makers, including Ford Motor Co. and Daimler AG, whose supply chains include cobalt buyers, in November set up a “raw materials observatory” that aims to address ethical and labor-rights issues in sourcing raw materials, including cobalt.

A Volkswagen spokesman said the company remains in “intensive discussions” with its suppliers to determine how to improve the sustainability of its supply chain, especially for raw materials used in electric vehicles.

Electrovaya Inc., a battery maker based in Toronto, is in discussions with Canadian cobalt miners, including Fortune, to lock down supply contracts for the coming years, said Chief Executive Sankar Das Gupta. “All our customers want ethical sourcing,” Mr. Gupta said.

A Fortune spokesman said the company has signed numerous confidentiality agreements with partners they are in discussions with, and declined to provide further comment on Electrovaya.

For Robin Goad, chief executive of Fortune, which is developing a mine in Canada’s Northwest Territories, that may be an opportunity.

Mr. Goad said that early next year he plans to announce project financing for the mine, which is expected to produce 2,000 metric tons of cobalt annually, as well as a refinery it plans to build in Saskatchewan estimated at a total cost of 650 million Canadian dollars ($516 million). He declined to give further details about the financing.

“You can draw a straight line from our mine in the Northwest Territories to the refinery in Saskatchewan and know that is being produced here,” Mr. Goad said. “When you get [refined] cobalt from China, you don’t know where it’s being sourced from.”

Miners outside of Canada are looking to cash in on demand for cobalt. Toronto-based Sherritt International has nickel-cobalt mines in Cuba and Madagascar that produce about 7,000 metric tons of cobalt, roughly 6% of the world’s total production.

“Market dynamics are right now in our favor with respect to cobalt,” said David Pathe, Sherritt’s chief executive, adding that the company is in a good position to source cobalt from mines free of conflict and labor violations.

First Cobalt sees potential in abandoned open-pit silver mines just outside Cobalt, Ontario, which is located approximately 300 miles north of Toronto and is named for its historic links with the metal. More than 50 million pounds of cobalt and 600 million ounces of silver were mined in the region before miners abandoned the area shortly following the World War II after exhausting the region’s silver mines.

“Next year, we gotta drill the hell out of this thing,” Mr. Mell said.

This article was republished as part of our daily reproduction of WSJ.com articles that also appeared in the U.S. print edition of The Wall Street Journal (January 3, 2018). Write to David George-Cosh at david.george-cosh@wsj.com